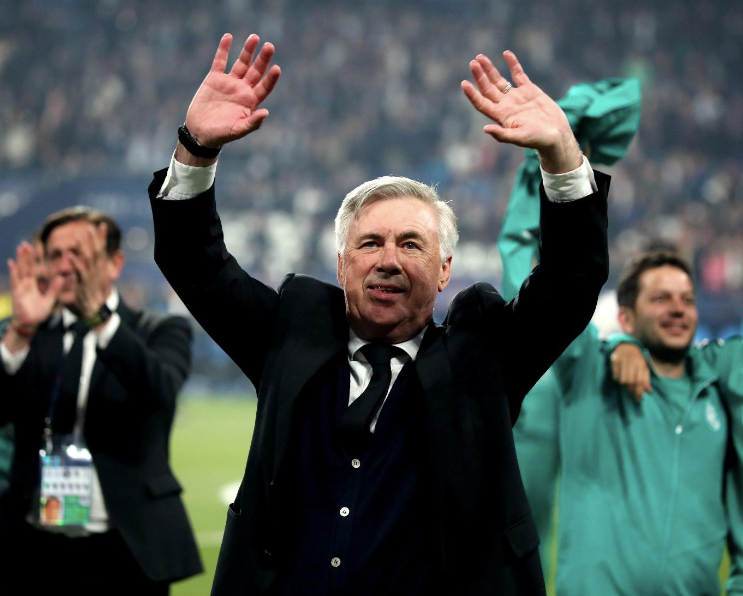 Real Madrid’s 1-0 victory over Liverpool in Paris ensured manager Carlo Ancelotti has become the most successful manager in the competition’s history. The showpiece final at the Stade de France, overshadowed by the incompetence of UEFA and stadium security as kick off was delayed due to poor treatment of fans, was eventually decided by Vinícius Júnior’s goal on the hour mark, as neutrals once again witnessed a cagey and tactical affair in the final, with fine margins proving decisive.

Real made it a 14th European Cup and further pull away from AC Milan as their stranglehold on the big-eared trophy continues, whilst Ancelotti continues his pursuit of becoming the most decorated coaches to have sat in the Santiago Bernabéu dugout. The Italian is in his second stint at the club, and overtakes his former assistant Zinedine Zidane and Liverpool’s Bob Paisley to win a fourth Champions League as a manager. Ancelotti also won two European Cups as a player, but read on as we take a look at his four strokes of genius on Europe’s biggest stage. Here are all four of Ancelotti’s wins in the Champions League.

In one of the most forgettable finals of the modern game, unless you’re in Lombardy maybe — the all-Italian affair between AC Milan and Juventus started slow, and finished slower. Goalless after the 90, the crowd at Old Trafford had little to cheer about in this game of chess between two of the most tactically astute sides around. Juve squandered the best chances of the game before a penalty shootout gave Ancelotti his first winners medal, Andriy Shevchenko scoring the decisive spot kick after Dida saved David Trezeguet’s effort.

Ironically, after his winner two years earlier, Shevchenko was unable to replicate that good fortune in Istanbul, as Milan capitulated from 3-0 up against Liverpool to lose in spectacular fashion. Left to stew on the result for a further two seasons, Athens was the venue for Ancelotti’s revenge. Despite less commanding in the bets for football as favourites for the trophy, Milan still possessed a far stronger side than Rafael Benítez, and the Rossoneri managed to get over the line this time as Filippo Inzaghi’s brace gave the Reds too much to do. Hearts were in mouths when Dirk Kuyt pulled one back in injury time, but Milan stood firm for a seventh European title.

This was the big one — La Decima. And it almost never happened. After a difficult season in which Real suffered with inconsistency in the league, but salvaged a Copa del Rey with Gareth Bale’s memorable goal against Barcelona, Madrid managed to make their first Champions League final for 12 years. They faced city rivals Atlético Madrid, who were riding the crest of a wave after winning La Liga on the final day of the season. This momentum gave Diego Simeone’s side an early advantage and despite Diego Costa coming off injured, Diego Godín gave his side the lead just before half time.

In the game’s dying embers Real looked down and out. Cue captain Sergio Ramos with an injury time header to salvage extra time. And from there the weight of Atlético’s season came crashing down on them. After burning out; Bale, Marcelo and Cristiano Ronaldo dealt fatal blows as the game ended unceremoniously 4-1.

The most recent edition to the Ancelotti medal haul, many Everton fans were bitter when the Italian left Merseyside to return to Madrid last summer, but a few grievances can be settled after he pipped their rivals to this year’s Champions League. As mentioned, Vini Jr scored the only goal of the game as Real showed their resiliency after a dominant Liverpool display. Thibaut Courtois put in a man of the match display at the Stade de France, with the Belgian making several important saves to blunt a dangerous Liverpool attack. It was a great display from Ancelotti tactically, opting to play Federico Valverde wide to double up on Luis Díaz, as well as provide the important assist to win the game for Los Blancos.

Barcelona ​​​​is an incredible destination.

How To Find The Right Insurance As An Investor

Are Betting Trends Actually Useful for Your Betting Strategies?

Debunking the Most Common Solar Energy Myths That Exist Today

Barcelona ​​​​is an incredible destination.

How To Find The Right Insurance As An Investor

Happy B-Day to Meryl: The Diva of Divas